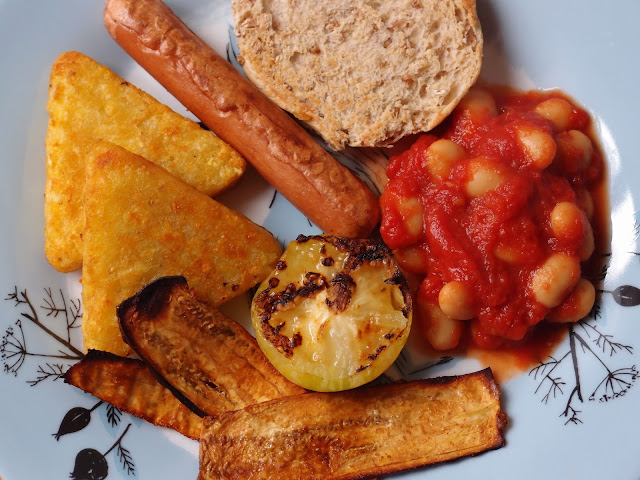 Do I miss England after over four months in Denmark? The answer is not really. To be honest I don't think about it much, but of course I miss my friends, some of the local people in my area, nice restaurants and pubs, certain products in shops and so forth. However all in all life is better for me here. I'm glad that I have no regrets regarding the move, and it has been good to settle in here.

A vegetarian version of the English breakfast might be something that I miss slightly. It's not something that I would have very often, but now I made a spontaneous vegetarian fry up breakfast, as it has been quite a while. I was also watching some cooking videos by the Avant-garde Vegan, Gaz Oakley from Wales. He made aubergine bacon for his vegan breakfast, and that was something that I wanted to try. I slightly changed the marinade based on the things I had available, but I very much liked the end product as an addition to a veggie fry up. But definitely do check Gaz' YouTube channel, if you haven't done so yet, there's some really fine vegan cooking over there.

I also made different kind of baked beans by using butter beans and tinned tomatoes to make the mix. I added a splash of cider vinegar, salt and sugar to the beans and let it reduce for a while. I served some ready made soysages from the shop, potato rostis, wholemeal roll and a fried tomato with this breakfast.

Here is how I made the “facon”.

Make the marinade by mixing the ingredients together.

Roll the aubergine slices in the marinade so that both sides get coated and place them on baking paper.

Bake in the oven for about 15 minutes until crispy and serve with the breakfast. 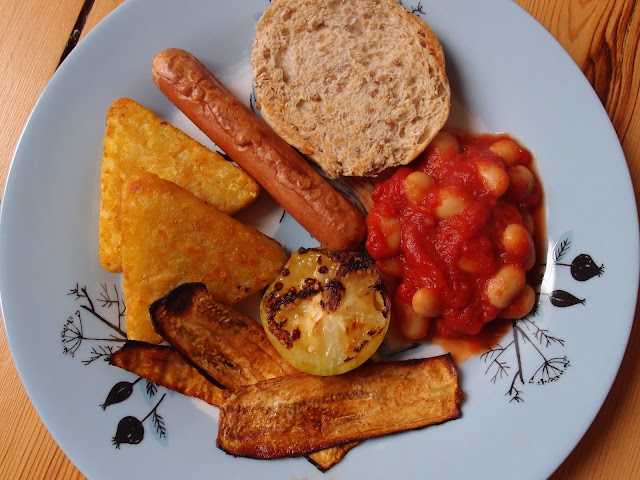